Effects of Art on the brain of an Underprivileged child

We encounter daily experiences, patterns and relationships which reveal a great deal about who we are as interacting humans. Socio- economic and societal issues play a factor in the development of brains and ultimately, the behavior. Disadvantaged children clearly do not benefit from their place in society. Scientists, however, believe they have found one solution that can hopefully equate the growth of such children with normal but not necessarily affluent kids. Through creative enhancing techniques such as dance or movement, drawing and music, all children, underprivileged children especially, can advance their development.

Disadvantaged children become exposed to several obdurate, agitating experiences, or stress, that eventually leads to cognitive, social and emotional problems. Through the presence of art in the life of such a child, that child can use art for its therapeutic devices while benefitting their "cognitive, social and motor abilities" . The presence of such problems due to the environment of these children were born are sometimes exhibited in such forms of anxiety, nervousness, lack or excessive amounts of sleep, lack of social, language and verbal skills . Ultimately, maltreated children will learn at a slower rate than normal children and a discrepancy will occur between their age and level of emotional maturity. For example, a six year old child might act, feel and "carry themselves" as if they were three years in age. This technique which is sometimes dubbed "playful brain training" can help match their emotional to their chronological ( proper age range) level.

Before considering the physiological effects of art on the brain, let us consider how art influences the behavior of this child and how it can affect their daily tasks. It is not uncommon for a maltreated child to feel angry, out of control or terribly insecure. Through dance for example, the child will not only form rhythmic skills by listening to music and moving to it, but the child can adopt a sense of control and autonomy by controlling their bodies so that their movements match the beat of the music. This discipline can foster self management and impulse control . But more importantly, certain music like classical music of Bach or Beethoven can have a soothing and relaxing effect on stressed children whereas more harsh and upbeat music can cause a child to become more hyper. They will soon realize what "tastes" they have for music and how their music affects their moods. Art, on the other hand, can also be used as a self esteem booster when their pieces are displayed or when others compliment their presentation or efforts. 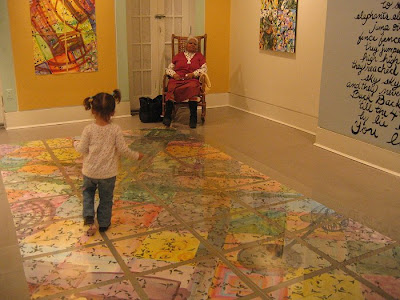 The arts can also awaken their senses and make the child more aware of the surrounding material and spiritual world. Fox and Berry called art a "sensory and exploration activity" . Orphans and foster children, if given up for adoption at a very early age, do not receive that close interaction between them and their parents. Hugs, kisses and other physical stimuli are not present. Drawing, by no means can substitute for the hugs and kisses from a parent, can give a child the joy of seeing an image form before their eyes or the joy of stroking colors of paint onto a plain canvas. While this improves hand-eye coordination, this type of tangible exploration can teach him to physically interact with the outside world .

Not only does art provide insight to external figures beyond their own bodies, but it can serve as a link for communication which is crucial in relati ng to society. The underprivileged children sometimes do not learn the proper skills needed to express themselves. Whether it be through dance, music or painting, the child has included some underlying meaning about what their piece means both to them and to their audience. As a result, he will feel accmoklished when his message has been successfully conveyed. With regards to social and language skills, Dr. Coutler, a neuroscience educator, suggests that the rhythmic skills acquired from music are related to the "inner speech" . Baney states about Dr. Coutler's teachings, "Logic or reasoning also develops as a part of the inner speech, as the child becomes able to organize ideas and solve problems. Children with more developed inner speech and impulse control also exhibit greater social skills" .. Exposing children to art from the time they are born can nurture the intellectual process, especially if they face socio- economic or familial strains. Such art exposure can help their social advancement so that the discrepancy between their age and cognitive age decreases.

Drs. Rauscher and Shaw , and Dr. Jeff Thompson both offer physiological explanations on how music, in particular can improve children's intellect by affecting the brain. The arts offer an alternative way of strengthening skills while exposing children to different forms of education. Cynthia Ensign Baney, the web author who cites Drs. Rauscher and Shaw, prefers to disregard the old comparison that a brain functions like a sponge, soaking up all of the information. Rather, Baney compares the brain to a " 3-D dot to dot" . She calls these connections neural bridges. To continue the lingo of our classroom discussions, when a child learns something new, additional connections between boxes form while older connections become reinforced if used often. These neural bridges change the structure and construction of our brain. Baney reaffirms that a true sign of intellect results from the ability to join these boxes together quickly and effectively. This training improves the spatial skills which become essential to problem solving subject especially in the science and math. Even more so, these spatial skills compliment the daily problem solving skills that are not necessarily linked to math or science. The betterment of these abilities allows these maltreated children to eventually work through their problems when they are ready to deal with other issues. In that same site, Baney sites Dr. Edwin Gordon's study. She writes, "Gordon's research confirms that the highest level of music aptitude occurs immediately after birth"   The synapses created during infancy are completed in astonishing rates when compared to adults. By the time we reach adulthood, several of these connections have been discharged while the links that the person continues to utilize, stay .

Although the exposure of art is not available for all underprivileged children from infancy, a few programs exist in aiding these children develop some of the skills that might have been neglected.
Thompson, on the other hand, approaches the effects of sound from a therapeutic point of view. Thompson uses sound to alter the "brainwave patterns and states of consciousness, observable on brainwave mapping equipment (EEG) as well as positive changes in the body measurable with blood tests, bio-feedback equipment and other sophisticated procedures" . Thompson has his own recording named the "Inner Dance" which is designed to bring out certain wave changes for several different emotions through his pattern . This emotion evoking exercise eventually can help burdened children in learning to cope with their feelings. Once they realize that these emotions are present, the children can then work at coping with the anger, rejection or any other feelings in a way appropriate to their ages.

This presence of such strains has a profound aftermath on the behavior and brain development of the child. Although the problems that the child faces cannot always be reversed, suggestions like implementing art into their curriculum can relieve them from some of their troubles while enriching their cognitive, social, and emotional abilites. The presence of art can serve as therapy. Since the child is most apt at building connections while an infant, it would be most helpful for the child if art were revealed to them as soon as possible. But since this cannot always happen, art still provides older children with the chance to communicate and expess what they think while enhancing their own behavioral and intellectual skills.

by Christina Pili
Posted by ArtEstate at 5:46 PM